Interviewer (Int): Good evening, Dr.Darkstone. Thank you for talking to us. Let me begin by asking you how you got into magic? 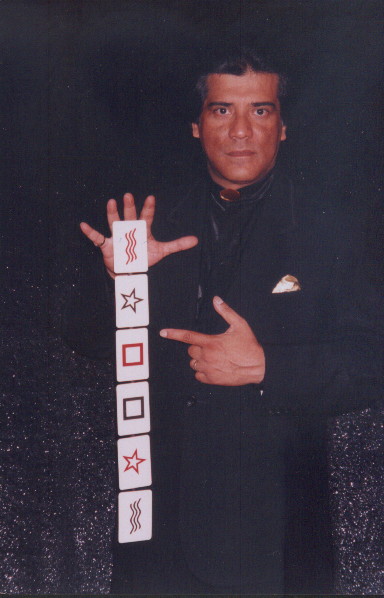 Anthony Darkstone (AD): Good evening. My pleasure . Nice of you to ask me to chat about magic. I began in magic even before I was born. I guess that may seem strange thing to say but it was my destiny even before I was born. Both my paternal and maternal family had a tradition going back many hundreds of years of being involved in the performance of magic. In more recent times, as you may already have heard, my father was a magician and so was my grandfather. Although they were not full professional magicians, they loved magic and I guess that love came down the generations and is still being transmitted. I am proud to say that my son is carrying on the family tradition and I am happy to state that he is an Award winning International magician in his own right including the fact that he was the opening act for a show in Las Vegas at just 21 years old.

Int: Yes indeed. We are looking forward to seeing him at our Convention. It will be very exciting to see you both perform in our gala shows. I also understand that you both are amongst an elite group of magicians to receive The Circle of Palace Magicians Award in Scotland .

AD : Yes, it was an honor and a very proud moment to be called up at the end of a formal dinner where the guest of honor was the Lord Lieutenant, the Representative of Her Majesty Queen Elizabeth II.

It was very emotional and humbling to be called up together with my son to receive such a great award.

Int: When did you actually start to perform magic?

AD: On the 7 th day of the seventh month in 1947 at precisely 7:07AM. I guess being born is the most magical thing ever!!! Well, after that, to be quite honest , I am not really sure , I think it was when I was about 5 or 6. I was given an old wooden eggcup and ball. I just became so fascinated with it that I would keep on doing it over and over again. 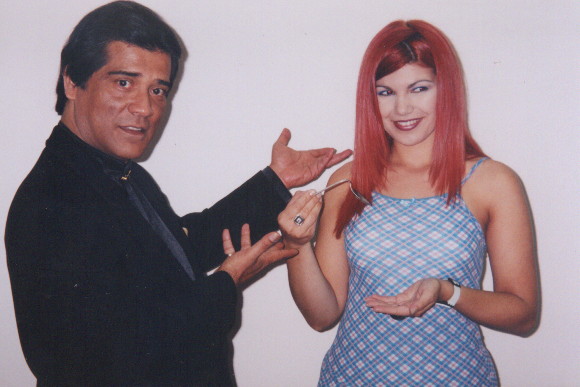 Int: Fun answer. I guess that means you have been doing magic for some time then.

AD: Well, yes. However, there was a time when I didn’t devote myself entirely to the performance of magic. It was in the late 60’s. I became fascinated with the subjects of kinesics, psychology, behavioral sciences and many esoteric topics as well.

Int: Tell us a bit more about this side of your personality.

AD: It was time when great changes were going on in the world in terms of economics, politics, social structure, culture and in general it was the era of flower power and many “new” ideas. In was in those times I developed a love for the esoteric and delighted in the enigmas. Many of my passions today, began then; such as the works of Carlos Castaneda, Japanese Haiku poetry, Native American Spirituality, Rosslyn Chapel, the Kabbalah and many other topics too numerous to mention here.

Int: Interesting that you mentioned the works of Carlos Casteneada. Your performances are suave and sophisticated but also have a very dramatic feel and more than a hint of a Shaman like quality. Were you influenced by Castaneda?

AD: In a manner of speaking, yes. However, it was just one of the influences that affected my style of performance. I spoke earlier of my love for the esoteric and that too in some ways was the result of genetics. I have tribal links with Native American culture that can be traced to Kiowa-Apache Medicine men. So, there is very much a deep Spiritual side to me as well. Having said that let me add that many people have stereo-typed perceptions of Native Americans. Often, these are mis-conceptions brought about by some 80 years of Hollywood ‘s interpretations. 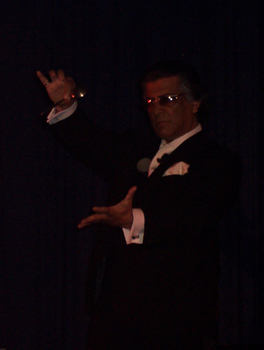 I am also a great devotee of Taoism and enjoy the paradox of the Tao. There is a sense of pace in the Tao that is well suited to the performance of magic. An inner balance, a quintessential “opposite” that creates a harmony that translates well into my style of performance. I was, and still am, very influenced by many great actors such as Lord Oliver, Yul Brynner and Marlon Brando. Performers such as Sammy Davis Jr., Frank Sinatra had this amazing ability of being able to hold an audience spell-bound. There was a complete sense of mastery and professionalism in every single movement and gesture. Much of my own rhythm, cadence and indeed movement on stage have been the result of long study of the field of theatrical arts.

Int: Speaking of theatrical arts, you are well known for your views, articles and workshop/lectures on performance and presentation. Tell us a little about this.

AD: That would be difficult as these two topics merit much study and detail. However, I will try to be succinct and say that presentation and performance is absolutely crucial to a magician. It saddens me when I see many so-called magicians who spend time, energy and money on tricks , practice them a few times and then go out and perform them. Sadly, too many magicians believe that they are fooling people with “clever” tricks. In a way, they probably are, but are they entertaining their audiences? Is the object of doing magic merely to fool people or is it to entertain by using magic as the means? 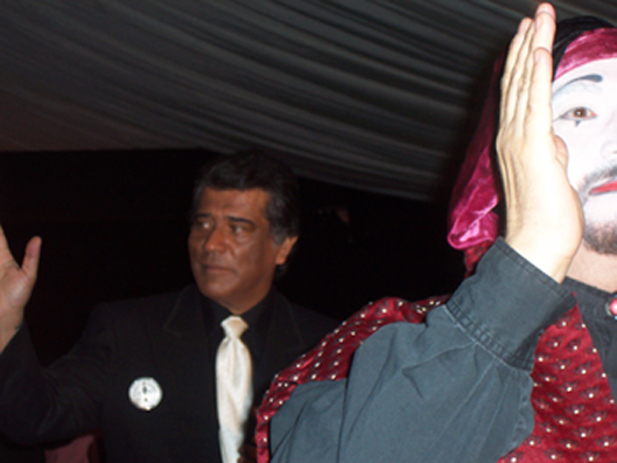 Lay people see magic in a completely different way. Their perception of magic is so far removed from ours that unless we get them to suspend their dis-belief we are just being slick, glib and dull. For me, entertainment is the key word.

I passionately believe that the real magic begins after the curtains close and the audience keeps talking about your act.

Int: You are often described by magic’s elite as “ Magic’s hidden treasure and Magic’s Great secret”. How did this come about?

AD: Over the years I have been privileged and honored to become friends with many of the great names of Magic. Several of them have graciously asked my advice. I am delighted to state that some of them have also been highly ranked at various FISMs. It is quite an honor to have one’s opinion sought and to be consulted on aspects of our Art. With all humility, I am pleased to say that my work on magic both publicly and privately has been appreciated and I have had some kind words said about my work in this area. Las Vegas magical star Steve Dacri, who is a good pal of mine was the first person who actually started the phrase of “ magic’s hidden treasure” . He wrote a tribute to me when, in January 2001, I was featured on the cover of M-U-M, The Society of American Magicians publication. Since then, it has just stuck

Int: You also are sometimes referred to as “ The Larry King of Magic”. How did that get started?

AD: That was started by a very dear friend, the one and only legendary Bob Blau, who sadly passed away a few years ago. Bob was one of the stars that I had interviewed in my series entitled” In Conversation with….” . Others like Eugene Burger, Jon Racherbaumer , George Saterial , Scott Wells , Ayala, Dan Garrett , Walter Blaney , Steve Dacri , etc were also in that series. As you know, I’ll be Hosting a Talk Show at MARS and my guest will be the incomparable Max Maven.

Int: Are you looking forward to coming to Israel ?

AD: Absolutely. I am very much looking forward to it. I was delighted when my friend Menny Lindenfeld suggested to Roei Zaltsman that I might be worth inviting. In fact, after the Convention, my family and I are planning on staying on for a few days more and visiting many points of interest. I am very fortunate that, not only can I visit Israel but I also get to spend time with my Israeli brother magicians and become part of Israel ‘s first International Magic Convention. What’s more, I get to do all this in the wonderful city of Eilat in the splendid Queen of Sheba Hotel. It can’t get much better than that! 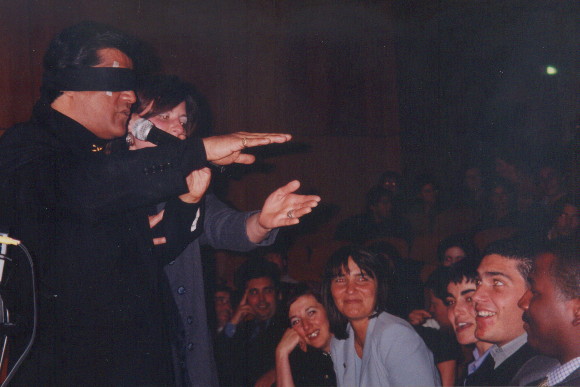 Int: Do you know many Israeli magicians?

D: Not many, but I hope that I will get to know a lot more at MARS. I have already mentioned Menny Lindenfeld ; I must also mention Guy Bavli and Yuval Keren. I must publicly thank them for sharing their skill and knowledge with me. I also know of many others and I happen to know that Israeli magicians are very highly thought of in the International Magic community. I am truly looking forward to meeting many of them at the first ever International Magic Convention in Israel.

Int: We heard somewhere that you have been working on two magic principles that date back to 522 BC and 1612. Can you elaborate on these?

AD: Yes, that is correct. You are referring to work that was inspired by Pythagoras of Samos and another item that was the basis of much discussion amongst professional gamblers going back to the time when pirates plundered treasure from the New World . I have been working on these for some years now and following the suggestion of one of the world’s leading card magicians, my good friend Jon Racherbaumer , I decided to lecture on my findings.

Int: You will be lecturing on this at MARS?

AD: Yes, on the very last day of the Convention and only to magicians. The lecture will take the form of a workshop and be highly inter-active.

AD: No, not really. Someone, I can’t recall who, rightly remarked that we all stand on the shoulders of those who have gone before. I have been using these for some years now and I believe it is now time to share these with others who will then take it further along to the next stages. I believe sharing these with my Israeli brother magicians is the right thing to do to advance our Art.

Int: Thank you Dr.Darkstone, we are looking forward to having you here and wish you a very pleasant stay.

AD: My pleasure, You are very welcome, Shalom and Thank you. 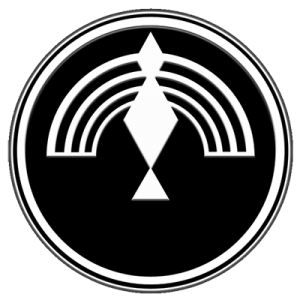